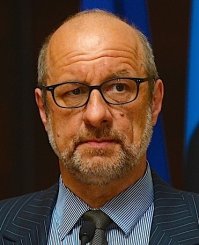 I am currently working on the rise of right-wing populism in Central and Eastern Europe and beyond. While partially based in the School of Slavonic and East European Studies at the University College London, I co-supervise two large international projects financed by the European Commission. For more information, please consult here. FATIGUE is designed to train 15 doctoral students, while the POPREBEL's goal is to develop a new intepretation and explanation of the rise of populism, particularly its right-wing variety. The first fruits of my own work in this area are a blog entry and an article on the cultural side of the right-wing populist mobilization in Poland. POPREBEL has a working paper series that I co-edit.

In 2020 I served as the elected President of ASEES (The Association for Slavic, East European, and Eurasian Studies).

After studying sociology and philosophy at the Jagiellonian University in Kraków, Poland, and several years of teaching in the Department of Sociology there, I earned a doctoral degree in anthropology from Columbia University. What am I doing in political science? The answer can be found in my main intellectual passion. As long as I can remember I have been fascinated by the relationship between power and culture, an area that is located at an intersection of several academic disciplines. Later, I developed the lasting interest in social movements and protest politics, again a rather interdisciplinary area of study. My interest in the complex interplay between power (politics) and culture was solidified and became a bit of an obsession in 1980-1, while I was living through the exhilarating experience of the first Solidarity period in Poland. My first and one of the most recent books, The Power of Symbols against the Symbols of Power and Anthropology and Political Science (with Myron Aronoff) are the best exemplifications of my approach. I study politics and culture comparatively, but the principal “source” of my observations and data is Poland and East Central Europe. I draw on my own empirical work in this region and regular collaborations with social scientists who work in and on Eastern Europe.

I have been associated with Rutgers since the early 1990s, but spent almost three years (2015-17) in London, directing the School of Slavonic and East European Studies (SSEES) at University College London.

During the last few years I have also returned to my earlier interest in the philosophy and methodology of social sciences (particularly interpretive and ethnographic approaches) and contributed to this area through teaching, writing, and participation in conferences and workshops.

My research is concentrated in three fields: (1) civil society, social movements, and protest politics, (2) the relationship between politics and culture (including the politics of historical memory), and (3) democratization, particularly in the context of post-communist transformations. I draw on these three areas in my recent work on right-wing populism.

For a description of my research agenda, past and present, please click on the "Research" tab.

I am currently working on two major projects. The first is The Logic of Civil Society: Poland, 1989-2017. It is massive. We have just finished constructing a large data base and writing a book. It builds on my earlier work with Grzegorz Ekiert (Harvard) that resulted in our Rebellious Civil Society: Popular Protest and Democratic Consolidation in Poland, 1989-1993. Another collabolatior is Michal Wenzel.

My second project has two components. Both are related to my position of profesor at University College London (UCL). I co-direct an international consortium of six universities, led by UCL SSEES. We have received 3.5 million Euros for an innovative training network that over four years will train fifteen Early Stage Researchers (Delayed Transformational Fatigue in Central and Eastern Europe: Responding to the Rise of Illiberalism/Populism (FATIGUE) and another 3 million Euros for Populist Rebellion against Modernity in 21st-century Eastern Europe: Neo-traditionalism and Neo-feudalism (POPREBEL). The projects are designed to study one of the most pressing issues of our time, the rise of right-wing populism in post-communist Europe (and Europe, more generally). You can find more information about both projects here.

In the last decade I published three books. After several years of work with Mike Aronoff (Rutgers, retired) we published a book that summarizes many of our ideas on the relationship between political science and anthropology: Myron J. Aronoff and Jan Kubik. 2012. Anthropology and Political Science: A Convergent Approach. Berghahn Books. You can purchase it here from the publisher. In Google Books you can read some fragments and peruse the list of chapters.

"What a welcome book! Myron J. Aronoff and Jan Kubik, two erudite, widely read, and innovative scholars, have provided an insightful and much-needed map that charts the terrain linking politics and culture. This intervention into a long-standing conversation about the boundaries of the 'political' will stimulate students for years to come." Ed Schatz, University of Toronto.

The second book, on post-communism, was prepared together with my former student and collaborator, Amy Linch. We had a great team and are very happy with the result, a book that proposes a fresh approach to postcommunism: Jan Kubik and Amy Linch, eds. 2013. Post-Communism from Within: Social Justice, Mobilization, and Hegemony. New York: SSRC/NYU Press. Here is the publisher's website.

It is an edited volume, with a lot of our own writing. Amy wrote an Introduction and I provided an extensive review of the field of post-communist studies, suggesting that the best work in this area tends to coalesce around a research program I call contextual holism. The lead chapters are written by Tom Wolfe and John Pickles (a critique of many assumptions underpinning "standard" approaches to the region); Alena Ledeneva (a critique of what she calls the "corruption paradigm"); Joanna Regulska and Magda Grabowska (an extensive, critical review of the literature on gender in postcommunism); and Ivan Szelenyi and Katarzyna Wilk (a critical look at the work on post-communist poverty). The project was sponsored by the Social Science Research Council in New York.

The third book came out in July 2014: Twenty Years After Communism: The Politics of Memory and Commemoration. Oxford University Press. The book's early prospectus is here.

Michael Bernhard (University of Florida) and I developed an original analytical frame, proposed a theory of the politics of memory, and led a team of exceptional scholars to investigate the politics of commemorations in 17 post-communist countries. We are studying the way 1989 is collectively remembered, how this remembering is politicized, and how it influences the course of democratic consolidation. The team met for the first time at a conference on this topic at the University of Florida, February 4-6, 2011. A great group of scholars, each providing a chapter on a country from the region. A truly amazing conference that initiated the project that offers many new insights into the politics of memory in the post-communist Europe.

Chapters and/or fragments of these projects are available upon request.

I have been teaching broadly on the topics related to my research agenda at Rutgers (Department of Political Science), University College London (School of Slavonic and East European Studies (SSEES)), and the Graduate School for Social Research (GSSR) at the Polish Academy of Sciences in Warsaw. I have been also a guest lecturer at several other universities in a few countries.

Jan Kubik is Professor in the Department of Political Science at Rutgers University and Professor of Slavonic and East European Studies at University College London (UCL). He works on the rise of right-wing populism, culture and politics, and protest politics. Among his books are: The Power of Symbols against the Symbols of Power and Twenty Years After Communism: The Politics of Memory and Commemoration, with Michael Bernhard. The 2020 President of Association for East European and Eurasian Studies and the recipient of the 2018 Distinguished Achievement Award from the Polish Institute of Arts and Sciences in America (PIASA). Co-director (with Richard Mole) of two international projects, Delayed Transformational Fatigue in Central and Eastern Europe and Populist Rebellion Against Modernity in 21st-century Eastern Europe (https://populism-europe.com/poprebel/). He received M.A. (sociology and philosophy) from the Jagiellonian University in Kraków, Poland and Ph.D. (anthropology, with distinction) from Columbia University.