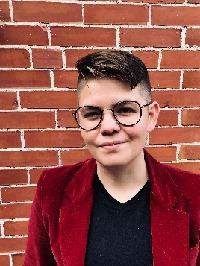 Elena Gambino is an Assistant Professor of Political Science at Rutgers University. She works at the intersections of feminist, queer, and critical race theories, focusing in particular on how everyday political actors have developed and deployed these traditions to build coalitions, how they seek to contest and repair the inequalities that underpin modern political communities, and how they imagine radical futures premised on racial and sexual accountability. Elena’s book project reconstructs a range of radical political claims made by lesbian feminist writers and activists ranging from the late 1970s through the early 1990s, and turns to feminist political archives often overlooked by political theorists, such as the popular lesbian feminist magazine Sinister Wisdom. The project shows that the practice of intersectional accountability developed by lesbian feminists such as Cherríe Moraga, Audre Lorde, Barbara and Beverly Smith, Adrienne Rich, and Monique Wittig, among others, offers valuable insights for theorists grappling with how to imagine more radical and accountable coalitions in the present.

Elena is also working on several new projects, including a study of linking contemporary mutual aid projects to debates in feminism and anti-capitalism, and an exploration of the tensions and possibilities in “prefigurative” politics in contemporary social movements.

At Rutgers, Elena teaches courses in the Women and Politics subfield, where she brings together ideas at the intersection of political theory, feminist theory, and histories of sexuality. She offers a range of courses, including The Nature of Politics, Gender and Political Theory, Contemporary Feminist Theory, and Marx and Marxisms. At the graduate level, she teaches courses in feminist political theory.

Elena’s work has been published in Political Theory, and she is the recipient of the 2020 Leo Strauss award, presented by the American Political Science Association for the Best Dissertation in Political Philosophy. Her paper “Politics as Sinister Wisdom: Reparation and Responsibility in Lesbian Feminism” was also selected for the Best Paper award by APSA’s Women, Gender, and Politics section in 2020.